How was the lagoon created?

Historically, much of the local area was quarried for clay for use in the manufacture of bricks. Rattlechain brick works was initially formed in the northern section of the 'site' around 1890 and later expanded to the south with excavations to depths of 20- 25m into the clay. Once the brick works closed, a large impermeable hole was left, hence the formation of the Rattlechain Lagoon. 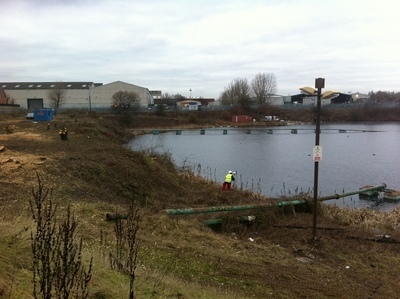 Lagoon prior to environmental improvement works undertaken in 2013

What is the history of the site?

Chemical manufacturing in Oldbury dates back to the 1840s, when a 29 year old chemist called Arthur Albright began manufacturing phosphorus. In time this led to the development of Albright and Wilson Ltd, a family owned business that would run for over 100 years. Although phosphorus manufacture itself ceased at Oldbury in the early 1970s the site still manufactures a range of different chemicals, all based on phosphorus chemistry. These products are used in everyday items such as mobile phones, children's nightwear, pharmaceuticals and detergents, as well as to treat water. Rhodia UK Ltd acquired Albright and Wilson in 2000.

The Rattlechain Lagoon which has also been referred to as Rattlechain pit and Rattlechain Mere is an old clay pit that was acquired by Albright and Wilson in 1947 for use as a waste disposal site. It was used by Rhodia as a waste landfill site up until 2006 when it was then closed to further waste. Although the site is no longer used as an active disposal site, the waste remains contained using the recommended method of storage, i.e. covered by water. Although the site is closed, it is still managed under licence from the Environment Agency.

What's in the lagoon?

The lagoon contains sludge from the site effluent plant plus other wastes coming from the Oldbury factory allowed by the licence. The contents are mostly calcium phosphate but also include white phosphorus, sulphur, and wastes and equipment contaminated with phosphorus. The amount of white phosphorus is estimated to be about 0.1% of the total waste.